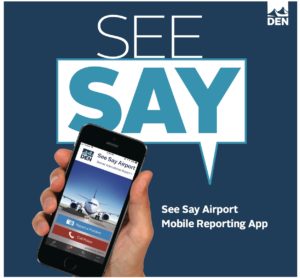 DEN is the first airport in the country to utilize ELERTS, a public safety communication app, to crowdsource reporting of safety and security issues. Much like the Department of Homeland Security’s national “See Something Say Something” campaign, “See Say Airport” allows real-time information about potential security threats to be shared immediately and discreetly with authorities.

“Safety is our number one priority and by downloading and reporting issues through the ‘See Say Airport’ app, the public can take an active role in keeping the airport as safe as possible,” said DEN CEO Kim Day. “We encourage anyone who visits the airport regularly to download the app and use it to communicate with airport authorities directly regarding safety and security concerns.”

App users can share information about things seen in the airport like suspicions persons or activity, unattended baggage and even spills or dirty restroom. The “See Say Airport” app allows users to send photos, videos, text messages and GPS location information to airport operations for assistance.

“We’re excited to work with Denver International Airport as they take the next step toward improved airport security and safety,” said Ed English, CEO, ELERTS. “The Department of Homeland Security’s (DHS) See Something Say Something campaign brought attention to the importance of reporting suspicious activity to state and local law enforcement, but was created before mobile phones were an everyday accessory for nearly everyone. Combining the campaign effort with our See Say Airport mobile app, which makes it easy for anyone in an airport to report suspicious behavior or questionable activity, is a powerful combination bringing this security initiative into the 21st century. Denver is an innovative first mover that will pave the way for airport safety and security communications – empowering the “crowd” – airport employees, contractors, vendors, drivers and the traveling public –  to help combat both internal and external threats.”

Similar versions of this app, developed by ELERTS, are being used by other major transit systems including MARTA in Atlanta, the MBTA in Boston, the NFTA in Buffalo, the VTA in Santa Clara and BART in San Francisco.

ELERTS communication technology integrates with video surveillance, access control and mass-notification systems to provide actionable crowd-sourced information for first responders. With headquarters in Weymouth, Mass., ELERTS can be reached by 877-256-1971 or connect with us on the web at: ELERTS.com, on the ELERTS blog, or on Twitter @ELERTSCorp.

Denver International Airport is the fifth-busiest airport in the United States. With more than 61 million passengers traveling through the airport each year, DEN is one of the busiest airline hubs in the world’s largest aviation market. DEN is the primary economic engine for the state of Colorado, generating more than $26 billion for the region annually. For more information visit www.FlyDenver.com, check us out on YouTube and Instagram, like us on Facebook and follow us on Twitter.