During the Boston Marathon, our Chief Architect Tim Bryan was just outside of Copley Square in Boston when the two bombs went off. Unable to place phone calls and having poor SMS service, he successfully submitted an incident report using the ELERTS app. This demonstrated that the best chance to get a message out is via the data network.

On Marathon Monday my fiancee and I went to the Red Sox game and we were walking down Newbury St. to get some food and cocktails. When we got to Exeter and Newbury (around 2:40pm-ish) we contemplated heading over to Boylston and walking by the finish line, but my desire for a post-game cocktail was greater than my need to walk a block out of my way and fight a crowd. 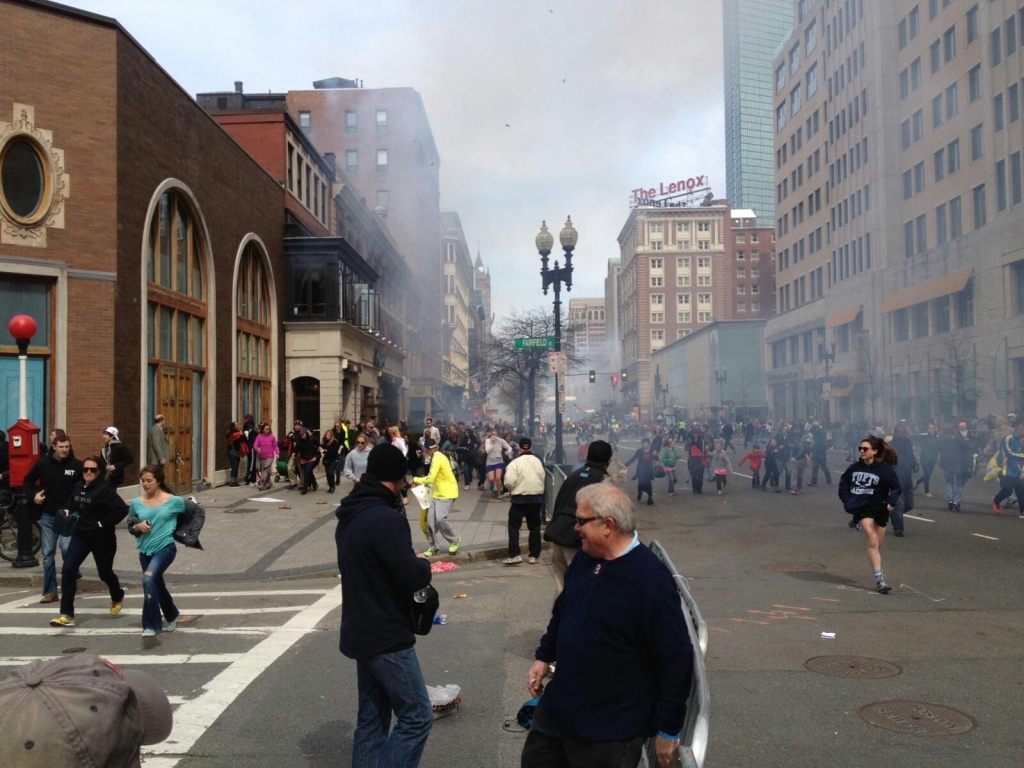 We continued walking to Dartmouth where we headed into The Met Back Bay Ham & Cheese Bar. Barely having time to take our seats at the basement bar, there was an incredible “boom” noise accompanied by a shockwave that rattled the building.

The bar went silent and no one moved. One person said: “What the [expletive] was that?” and immediately the second one hits. At this point we’re able to see Dartmouth St. full of people running away from Boylston St. Everyone in the Met grabs their stuff and piles out of the bar and follows the crowd.

I grabbed my phone and called our Founder & Executive VP Chris Russo (2:51pm) and tell him what I’m seeing. After being informed to get as far away from there as we can, I call our CEO Ed English and talk to him for a couple of minutes as we walk toward the Boston Common. It was at this point where I was unable to make any more phone calls and my SMS was very flakey at best. Most messages were not going out, at least not in a timely manner.

I then decided to see what our app can do. I sent a report to one of our ELERTS test accounts (just text, no picture) and it went right through. It’s worth noting that I was also able to use Google Voice’s texting feature mostly without issue as well; it makes sense as it uses the data network and not the voice or SMS networks. This proves that in a situation where there are a ton of people trying to use the network the best chance to get a message out is via the data network where the bandwidth can slow down and it isn’t using dedicated channels like voice and SMS.

People were seeing some important information but didn’t know what to do with it. All the social networks were flooded with first-hand experiences but no easy way for the people who need that information to aggregate it, at least not in a timely manner. Everyone was trying to help but didn’t know how, so they were throwing it over the digital wall and hoping someone saw the message that they were ok and that they had time-sensitive information about the situation. We were able to see that the MBTA got dozens of quality pictures and reports from the scene. I’d like to see that kind of crowd-sourced collaboration on a bigger scale.

Fast forward a few days and as far as the manhunt for the suspects was concerned I was getting all my updates from Reddit. There’s one place where I’m able to see all the reports from news outlets combined with citizens on the scene uploading pictures and first-hand accounts of the activity in Watertown/Cambridge. Again, I see this as people having information they want to share but don’t know where. Combine that with the reports that people were having a hard time getting through to the police/911/FBI hotlines, then an automatically-routed data-centric solution makes a lot of sense.

Someone in distress shouldn’t have to make a decision on who to call, or have to come up with details about what they are looking at or where they are; pictures and GPS do a far better job at that.

Tim Bryan is Chief Architect at ELERTS, using mobile technology to combine official-sourced alerts with crowd-sourced reports to put safety and security in the hands of smartphone users everywhere.