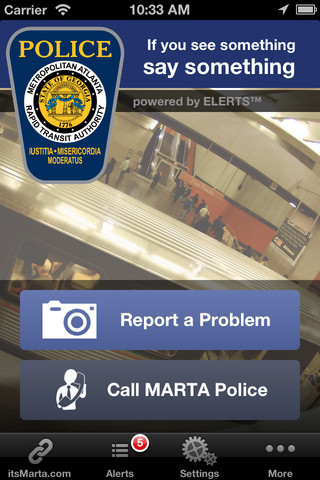 The app is very simple to use; there are only two buttons on the home screen.  The “Report a Problem” button allows smartphone users to send text descriptions, photos and locations to transit police.  For the passenger’s safety, the app disables the flash on the smartphone’s camera, so the passenger can take photos discreetly.  If service is lost while using the app, the contents of the report will be sent to police immediately once signal has been re-established.  The “Call MARTA Police” button allows the rider to connect directly to MARTA Police.

MARTA Police can use the app to keep riders informed of delays and changes, as well as enlisting riders’ help locating missing or wanted persons.  Two-way communication allows the police to request further details on incident reports and allows riders to communicate with police in response to alerts they receive.

“MARTA is the country’s ninth largest transit system,” says Ed English, ELERTS Corp CEO, “and the second transit system in history to utilize the popularity and prevalence of smartphones to crowdsource public safety.”  Boston’s MBTA was the first.  MARTA is also the largest public transit system located in the southern region of the United States, servicing a population of 1.7 million.  “Nearly half of MARTA riders are between the ages of 16 and 34,” English continues, “which is pretty much the same demographic that has the highest smartphone ownership and usage.”  This fact will undoubtedly influence the swiftness of the program’s success.

The partnership with MARTA is the next big development for ELERTS, as more infrastructure organizations, such as hospitals, school and corporate campuses, power utilities, and other transit systems, discover how they are able to utilize smartphones and crowdsourcing through ELERTS to improve safety for their employees, staff, patients and students.